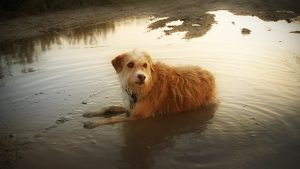 I love this idea of sharing stories about our dogs with other dog lovers.  We tend to share over a few drinks or a coffee at the local shops however they get lost in the competitiveness of our fellow pet parents.  My story probably isn’t hugely inspiring.  Our dog didn’t go into a burning building and save a life or stand in front of train to protect its owner.  It was far less dramatic however at the time it was panic stations and our dog came to the rescue.


For a number of years, once the school holidays started in December, I’d book a holiday house on the banks of the Murray River in Yarrawonga.  My brother lived in the town with his wife and two young boys, his youngest, Lachie whom this story revolves around was just 3 at the time. We lived in Melbourne, another brother just a few streets away also had a few nippers. I would bring my 2 daughters, our dog booz and somehow another 2 nephews would sneak into the wagon. Another brother, yep there is a few of us, would turn up with his kids and stay for a few days.  The house would be filled with 10 kids aged from 10 to 3. They loved it. I loved it.  It was a blowout for all of them.  The house was a cracker. Bunk beds in most of the bedrooms which became musical beds depending on who were BFF cousins from one day to the next. A huge open plan kitchen loungeroom that stepped through to a large undercover alfresco area complete with a built in BBQ, rolling grass went all the way down to the river edge where the boat was parked.  Skiing, biscuit riding and general laps around the lake were the order of the hot days. We’d all go for a swim in the dusk light; it was full on playtime from first thing in the morning until they all dropped dead of an evening.  Booz was in on everything never leaving the kids alone.  He’d be on the boat when they were on the boat.  He’d be swimming when they were swimming.  I’m positive he believed he was just one of them and I’m sure the kids thought he was just another kid and probably the best fielder when a game of cricket started.

Around day three we were getting the kids ready for a morning ski.  No easy task. Sunscreen, bathers, life jackets, ski gear, breakfast you know the drill it’s half organised chaos. My sister in law; Lachie’s mum had dropped off a bag for him that morning with fresh bathers and undies etc. The kids were playing on the tyre swing near the lake edge.  With the boat loaded we began dishing out who was going first, who was staying behind and bloody hell, where is Lachie?

Nobody seemed to know where he was.  “He was just here”, “it was his turn next on the swing” “I think he went to the toilet” time passed; confusion turned to panic we had spread out, we’d recruited a few tradies working on houses behind ours to join the search. The focus was on the water.  He could hold his own but he’s only three; has he fallen in?  The longer the time went the more the anxiety level went up.  A few of the kids had burst into tears as our worry became theirs.

I’d been in and out of the house about half a dozen times.  Each time booz would bark at me. I’d ignore him, too focused on finding Lachie.  Kids were running everywhere, tears were flowing, adults were in the water starting to get more than a tad worried.  Lachie was missing, he wasn’t anywhere we could see. Again, I went back into the house. “Where could this kid be?” again booz barked at me and this time I listened. He walked down the hallway, turning halfway down and going into a spare room that wasn’t being used. He stood near a bank of cupboards, his face toward the middle door and barked twice.  I looked down at him, then back at the cupboard door he barked again his face breaking into a smile, his eyes looking up then down then back up again.  I don’t know why but I opened the cupboard door.  Sitting in one of the cubes, head on his knees, a few little crocodile tears on his cheek was Lachie. He must have been in there for at least 15minutes, it seemed liked hours at the time, and would have heard many voices calling his name.  Hats off to the little bloke he wasn’t coming out or blowing his cover.  Truth be known if it wasn’t for booz we still be looking for the little blighter.
Why was he in there? Good question.
Turned out Mum had packed his batman togs and he really wanted his spiderman togs.

Did you find apk for android? You can find new Free Android Games and apps.

recent love from our fans

“These have to be my dogs favourite treat, long lasting and tasty too. Love em !!!!!” Jacqui

“I must add that your delivery service is 5 Star, and when I ordered it was promptly at my door.” Rod

FREE DELIVERY ON ALL ORDERS OVER $50
X